Since August 2016 Ithaca College’s adjunct contingent faculty has been vocal on their desire for pay increases and better job security. This is mainly because Adjunct professors are met with many disadvantages when compared to a full-time professor. Their salaries are usually lower and are sometimes on an hourly basis. They also risk losing their position as it is not permanent. Not to mention that adjunct professors do not work enough hours to receive benefits such as health insurance and retirement plans. The full-time contingent faculty would also bring the same complaints to the college administration in December of 2016. 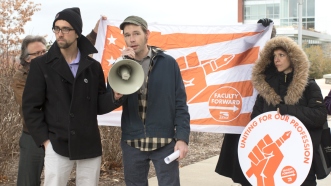 At the end of 2016 the two unions would join and begin negotiating with the Ithaca College Administration. In February, after several attempts at negotiating with no success, the IC Contingent Faculty Union/Service Employees International Union announced that they would be holding a strike vote. This immediately raised the pressure for the college to negotiate with the union. After much deliberation, the majority of union members voted in favor of the strike. The strike was to last two days and to occur on March 28th and March 29th. As the day crawled closer and closer, the college came to an agreement with the union. The IC Contingent Faculty would go on to post an official public update detailing the agreement. You can read the full statement here. Simply put, the agreement included pay increases and the desired job security.

What makes the agreement so unique is that the adjunct faculty have no tenure like full-time faculty. Tenure allows full-time teachers and professors to indefinitely hold a position once they have been with the school for a certain period of time. No benefit even remotely close to this was made available for the contingent faculty. Some of the new benefits detailed in the Contingent Faculty’s update give members guaranteed appointments and interviews if they have been with the college for a minimum of three years. While it is not exactly like tenure it offers job security for contingent faculty like never before.