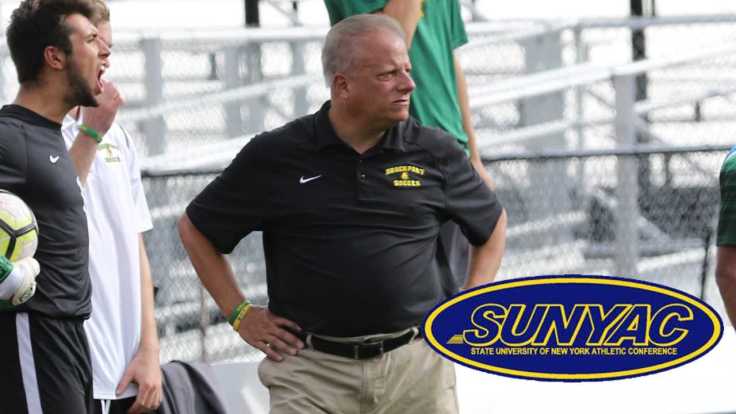 Brockport, NY – Dedication is defined as being committed to a task or purpose. With over 30 years of coaching soccer at both the high school and collegiate levels, Gary LaPietra, the head men’s soccer coach at The College at Brockport, fits the definition to a T.

LaPietra’s soccer career has always had strong footing in the Rochester area. During his college days, he was a member of the soccer team at St. John Fisher College and later become the head soccer coach at his former high school, St. Thomas Aquinas High School. With that being his first coaching job, LaPietra believes his time at St. Thomas Aquinas showed him how to coach young players.

“I didn’t really have much experience when I started coaching at the high school level,” LaPietra said. “I played at St. John Fisher. I had a passion for the game, and I wanted to keep it going forward so I got invested in coaching over 30 years ago. The one thing it got me involved in was just how to interact with the student-athlete, bonding with the players and families and then just improving your craft every year.”

Despite it being LaPietra’s first job coaching soccer, he still had a successful tenure at St. Thomas Aquinas. While coaching at the high school he achieved an overall record of 91 wins, 49 loses and 10 draws. LaPietra also led the “Little Irish” to postseason glory. While going against some of the best competition the state has to offer, LaPietra coached St. Thomas Aquinas to a Section V Class B championship. That team advanced all the way to the state semifinals. The success at the high school level lead to LaPietra climbing the ladder to coach at the collegiate level. He became the head coach of Brockport men’s soccer team before the 1996 season.

At Brockport, LaPietra has a long list of accomplishments. In 2012, he became the winningest head coach in the history of the Brockport men’s soccer program, passing A. Huntly Parker, who finished with 161 career wins. During LaPietra’s tenure, his teams consistently have been at the top of the SUNYAC.

Looking back at his long and successful career of coaching soccer in the Rochester area, LaPietra cites how being able to coach and work with his son was one of his greatest accomplishments, among other things.

LaPietra was proud of his players in the 2018 championship, when he said, “No one thought we had a shot in hell.” Another highlight was being able to coach his son for four years. Not a lot of coaches, he said, get the opportunity to teach their kids at the college level.

In order to stay competitive in a tough conference, LaPietra has a certain type of player he likes to recruit to his program.

“You have to be really good athletically, and you have to be able to push yourself,” LaPietra said. “That’s kind of how I saw myself when I played. I gave everything I had to my coaches whatever they wanted I gave to them and that is what I want my players to do for me.”

Throughout his time as the head coach at Brockport, he has held strong to his morals and does not waver on the qualities he likes in a player. While he likes to recruit players with good character to complement their talents, he also helps his players grow as people. LaPietra knows that is part of his job and tries to take time to coach them in both soccer and in life.

“I just try to be a good role model for the students,” LaPietra said. “I nurture them and try to be a mentor so that can do great things when they leave Brockport.”

Even though Coach LaPietra mentors young athletes, the job has taught him a lot as well as well help him grow during his adult years.

“You’re always learning every year,” LaPietra said. “When I first started, it just gave me a lot of confidence because I was just a young person getting out of college and just trying to start a career. So, really just confidence talking to people, interacting with people communicating effectively with people and it just really helps making people around you better and trying to inspire and motivate people to do great things both on and off the field.”

After 25 years with the Golden Eagles and multiple SUNYAC Championships and NCAA Tournament appearances under his belt, LaPietra still has goals he wishes to accomplish and that is what still drives him.

“I think the greatest goal would be trying to get to a final four and trying to compete for a national championship” LaPietra said. “We set high goals here.”